The day after the by-elections back in April the BC Liberals attempted to ” Reach Out” to several BC Conservative Party Board members.

They were told in no uncertain terms to take a hike.

Repeatedly BC Conservative Party Leader John Cummins has stated that the party has no intention to marge with the failing BC Liberal Government.

For one thing a lot of people in the BC Conservative Party are not just disaffected Federal Conservatives looking for a home but the party is also made up of people who have had enough with the current political system.

The BC Liberals ( We are not Liberals folks) would like to think that the Conservatives are the sole reason for their defeat in the by-elections and are the main reason the corrupt governing party will lose the next election.

If the truth be known,if the BC Conservatives did not exist and there was no other alternative, the BC Liberals would still get wiped out in the May 2013 election.

The only vote splitting that will happen will be by the downward trending BC Liberals and that issue was addressed recently by Rick Peterson in an excellent op=ed piece in the Vancouver Sun and redistributed on this blog.

Today the inept BC Liberals and their supporters attempted to once again ” Reach Out” board members and supporters via a letter from the desk of Peter Brown : 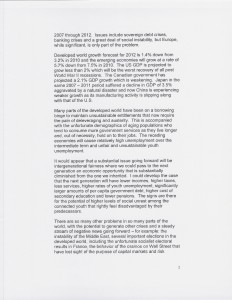 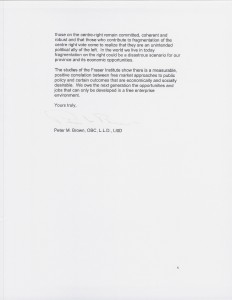 This letter insults all Conservative people under the BC Conservative Umbrella. It as if it is our fault that the supposed coalition has split apart.

Mr. Brown, Inept Premier Clark and the BC Liberal Crew need to take a good solid look in the mirror.

What the will see is their former leader hammered on a Hawaiian vacation, their new inept leader tee heeing her way through photo ops the whole time up to her arm pits in BC Rail,sleazily introducing and dragging out the HST and other assorted and sundry bull shit too numerous to name in this blog piece.

The BC Liberals had 11 years in government and they blew it. They will go out in infamy,their legacy will be corruption and sleaze.

They had a wonderful opportunity when first elected in 2001 and they have flushed it down the toilet.

The BC Conservatives on the other hand stand for honesty, integrity and accountability.They stand for reduced taxes and increased employment.

Why on earth would any BC Conservative in his or her right mind want to join a party like the BC Liberals?