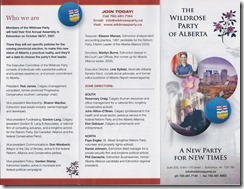 For the next 24 hours or so it’s all about the Wildrose party.

If current polls are to be believed ( and I hope they are)  The  Wildrose Party is poised to sweep to a massive majority and sweep the PC party of Alberta from power.

You might wonder why a good Conservative such as myself is pumped and primed for this to happen.

When I lived in Alberta in 2006/2007 and Red Stelmach was elected leader there were a lot of us who believed that there were a  a lot of new members who were not exactly Conservatives who took out membership and participated in that leadership contest.

I became one of the original Pamphleteers , door knocked and distributed some of the early literature. ( The picture above is that first brochure)

Between Red’s economic policy and followed by Alison Redford’s Socialist budget that kind of bears that out.

To Premier Christy Clark I ask: for the next 24 please sit back,commit no gaffes that will take the spotlight away from the Wildrose and watch how a real leader like Danielle Smith acts on election night. ( You will never get the chance)

Today I say to Danielle Smith and my friend William McBeath; Go get em tomorrow! Make us proud!